The Tibbs property is located within the Yukon-Tanana terrane (YTT), an allochthonous accreted terrane comprised mainly of Proterozoic to Triassic metaigneous and metasedimentary assemblages extending from east-central Alaska to south-central Yukon. The YTT is bounded to the north by the Tintina Fault Zone and to the south by the Denali Fault; both show a lateral displacement of roughly 400 km. Conjugate to these are a series of northeast-trending faults, including the Shaw Creek fault directly west of the Pogo deposit, and the Black Mountain Tectonic Zone which extends through the Tibbs property area. District-scale northwest-trending sympathetic faults, including the Pogo trend, occur between the Tintina and Denali faults. The YTT east of the Black Mountain fault has undergone intrusion by Cretaceous to Tertiary plutonic rocks, including the Black Mountain intrusion.

Three styles of gold mineralization have been observed at the project: Pogo-style Au+Bi±As±Te±W in quartz veins at the Gray Lead and Hilltop/Oscar prospects, and Au+As+Sb in quartz veins and wall rock disseminations at the Michigan, Blue Lead, Grizzly Bear, Upper/Lower Trench, O’Reely, and Wolverine prospects. Several of these prospects host both styles of mineralization in the same structure suggesting multi-phase mineralization took place. At the Gray Lead prospect a quartz-arsenopyrite ± pyrite ± bismuthinite ± jamesonite vein attaining widths of up to 4 metres was formed at temperatures from 260 – 455 °C, and pressures of not less than 1,700 bar. The vein appears to extend roughly along the western contact of the Black Mountain intrusion at the Gray Lead prospect. In the east of the project, quartz-stibnite-arsenopyrite veins and stockworks are found within sericitized granodiorite, notably at the > 1 km long, northeast trending corridor which defines the Michigan prospect. Both styles of mineralization are believed to represent a single intrusion-related gold system, with a deeper, higher-pressure setting for Gray Lead-style mineralization, and a higher-level, lower pressure, outboard setting for mineralization at Michigan. Prospecting activity during the summer of 2020 identified a third style of mineralization at Tibbs in the form of Fort Knox-style intrusion-hosted sheeted gold-quartz-bismuthenite veins at the Jorts and Hilltop prospects. 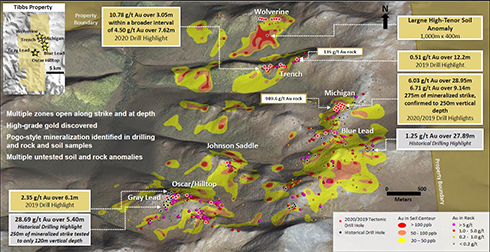 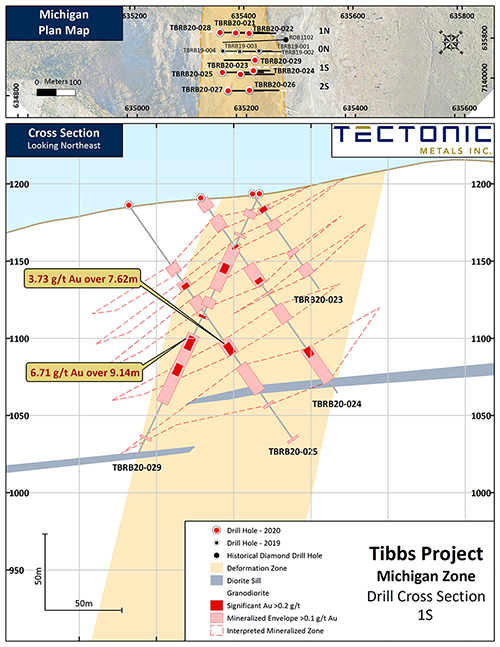