Maps, cross sections, and drill assay sheets associated with this news release can be viewed by clicking here.

Tony Reda, President and CEO, commented, “Our Phase I diamond drilling program at Tibbs targeted some of the highest tenor gold anomalies in the Goodpaster Mining District of Alaska, obtaining the first ever oriented drill core from Tibbs and successfully intersecting multiple intervals of visible gold in quartz veining at Michigan as well as Pogo-style quartz veining at Gray Lead. Tectonic’s diamond drilling campaign identified previously unknown controls on high-grade mineralization, with an east-west vein trend revealed within the core of Michigan, and a previously unrecognized plunge to the northwest within the high-grade core of the Gray Lead vein. We now eagerly await our Phase II drill results, the bulk of our exploration program, which predominantly tested new gold-in-soil and rock anomalies that have high potential for discovery.” 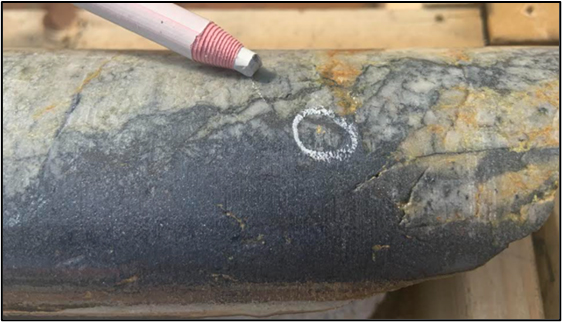 Figure 1: Visible gold (circled in white) at the margin of a massive quartz-stibnite vein in hole TBDD21-001 at 82.9m down hole

*True widths are not known at this time. All widths reported are drilled widths. Results are reported with at 0.200 g/t Au cut off with a maximum of 1m of internal dilution. No top cap was applied.

** A 1.83m void was encountered immediately prior to the reported intercept. The void is believed to represent historically mined-out vein material.

A table of drill results from Tectonic’s 2021 Phase I diamond drilling can be viewed by clicking here.

The objective of the first phase of the 2021 diamond drilling campaign at Tibbs was to obtain the first-ever oriented drill core from the project to determine the orientation of structures controlling high-grade gold at the Gray Lead and Michigan Zones.

Gray Lead Zone
The Gray Lead Zone was initially drilled in 1998 by the Stone Boy Joint Venture, which discovered the Pogo Gold Mine in 1994. A 2-4m thick quartz vein identical to the Liese Zone at Pogo was intersected at Gray Lead, though the vein was “high-angle” and dipped moderately to steeply to the west, rather than the low-angle dip of veins initially observed at Pogo. Today, both sets of veins have been mined at Pogo and the Pogo geological model has been updated to reflect this (See Pogo Model here).  The Gray Lead vein is one of the best examples of “Pogo-style” vein mineralization in the Goodpaster Mining District, which hosts the high-grade gold Pogo Mine. The Gray Lead Zone is open in all directions and at present contains 250m of mineralized strike to a depth of only 120m vertical. Tectonic is the first company to apply the updated Pogo geological model to Tibbs.

Four oriented core diamond drill holes were completed at the Gray Lead Zone during the first phase of 2021 drilling for a total of 251.76m. Drill holes TBDD21-005, TBDD21-006, and TBDD21-007 were drilled from a single setup in the centre of the target, infilling historical drilling completed by a previous operator with the goal of obtaining structural control on the zone, validating the historical data and obtaining the plunge and dip of the zone for future expansion drilling. These oriented drill holes were drilled with the goal of validating the historical drilling and determining the structural controls, plunge and dip of the high-grade core of the Pogo-style Gray Lead vein for future expansion drilling and details of the host stratigraphy for application in the second phase of 2021 exploratory drilling targeting analogues in the western, gneissic domains of the Property. All three drill holes successfully intersected the Gray Lead vein, with a highlight result of 12.45 g/t Au over 5.15m including 41.39 g/t Au over 1.26m in hole TBDD21-007. Within the quartz vein interval in hole TBDD21-007, a successful core orientation allowed for measurement of the internal fabric of the vein as defined by sulphide banding, which indicates a potential oblique plunge of high-grade mineralization within the vein.

Hole TBDD21-005 encountered a 1.83m void in the position of the projected intersection of the main Gray Lead vein suspected to be historical underground workings; as such, only the footwall vein was intersected. Hole TBDD21-004 tested the Oscar/Hilltop target, where 2019 drilling returned 2.35 g/t Au over 6.1m, one of the potential splays off the Gray Lead Zone and intersected low gold values associated with disseminated pyrite and arsenopyrite within strongly sericite altered granodiorite.

Michigan Zone
The Michigan Zone consists of a broad, northeast-trending structural corridor within granodiorite. Known high-grade rock grab samples (up to 989.6 g/t Au) define discrete high-grade quartz veins along the margin of the corridor, though the heart of the system was not tested prior to 2019 when Tectonic began exploring the target. Broad intervals of mineralization characterized by disseminated stibnite and pyrite within sericite-altered granodiorite are cut by discrete high-grade quartz veining. No structural control on the veining was previously known, as all drilling was either rotary air blast (“RAB”) or non-oriented diamond drill core.

Oriented diamond drilling in 2021 by Tectonic at Michigan consisted of three holes for 551.84m. Holes TBDD21-001 and TBDD21-002 tested the heart of the Michigan structure by drilling at dips of -60 and -55 degrees, respectively, to an azimuth of 170 degrees to best cut interpreted northeast and east-northeast trending features. Both holes intersected intervals of discrete quartz-stibnite-pyrite-arsenopyrite veining with visible gold hosted by strongly sericitized granodiorite with 1-5% disseminated stibnite, carrying lower-tenor gold values.  Intervals of quartz veining with visible gold were successfully measured to trend approximately east-west with near-vertical dips, indicating an internal control on mineralization not previously recognized. Michigan remains open in all directions with 275m of drilled mineralized strike to a depth of 250m vertical.

Tectonic’s Phase II discovery diamond drilling campaign focused on testing new, untested ground in the western region of the Tibbs Property at the Wolverine, West Trench, Johnson Saddle, Galosh, and Gray Lead West targets. A total of 23 drill holes for 4,215m were completed in the Phase II program (5 diamond holes for 1,516m, 18 RC holes for 1,699m). The program was designed to test possible low-angle structures identified by the mid-summer TITAN DCIP/MT geophysical survey in highly prospective gneissic rocks.  The Phase II program is now complete, with a total of 5,018m drilled during the 2021 season. Assays for the remaining 4,215m of drilling (84% of 2021 program) are pending.

The analytical work for the 2021 rock sampling program was performed by Bureau Veritas Laboratories (“BV”), an internationally recognized and accredited analytical services provider, which is independent of Tectonic. All diamond core samples were cut in-field using a core saw and submitted to BV’s Fairbanks, Alaska facility where they were prepared using procedure PRP70-250 (crush, split, and pulverize 250g to 200 mesh). Pulp samples were then sent to Reno, Nevada and Hermosillo, Mexico, where they underwent analysis for gold by method FA430, a 30-gram Fire Assay fusion with an atomic absorption finish (AAS). Samples returning >10 g/t Au were re-analyzed using method FA530-Au, a 30g Fire Assay with gravimetric finish. Additionally, a 0.25g pulp was sent to the Vancouver, British Columbia lab for a four acid Inductively Coupled Plasma Emission Spectrometer (ICP-ES) analysis for 35 elements using method MA300. Select high-grade gold samples were analyzed using a metallic screen fire assay by method FS652-1Kg, with a 1kg split screened to 106 um and the plus and minus fractions analysed for gold by a 50g fire assay with a gravimetric finish.

Quality Assurance and Quality Control procedures include the insertion of coarse blanks, certified assay standards, and quarter core duplicate samples into the sample string at a rate of approximately 1/10 (10%). Samples are placed in sealed, and security tagged bags and shipped directly to the BV preparation facility in Fairbanks, Alaska.

Tectonic Metals Inc. is a mineral exploration company created and operated by an experienced and well-respected technical and financial team with a track record of wealth creation for shareholders.  Key members of the Tectonic team were involved with Kaminak Gold Corporation, the Company that raised C$165 million to fund the acquisition, discovery and advancement of the Coffee Gold Project in the Yukon Territory through to the completion of a bankable feasibility study before selling the multi-million-ounce gold project to Goldcorp Inc. (now Newmont) for C$520 million in 2016. Tectonic is focused on the acquisition, exploration, discovery and development of mineral resources from district-scale projects in politically stable jurisdictions that have the potential to host world-class orebodies.

Certain information in this news release constitutes forward-looking information and statements under applicable securities law. Any statements that are contained in this news release that are not statements of historical fact may be deemed to be forward-looking statements. Forward-looking statements are often identified by terms such as “may”, “should”, “anticipate”, “expect”, “intend” and similar expressions and include, but are not limited to, statements with respect to: the payment of finder’s fee and issuance of Finder’s Warrants; the exercise of the Finders’ Warrants in accordance with their terms; and the receipt of any regulatory approvals, including the final approval of the TSXV.