Phase II drilling focuses on drill testing these Pogo-like targets, including West Trench, Johnson Saddle, Galosh, and Gray Lead West, which have never been drilled before.  Oriented diamond drill holes will test for both low and high-angle structures as interpreted at these targets. At Pogo, both low and high-angle structural features acted as structural conduits for mineralization, with faulting observed both at lithological contacts, which acted as weak zones amenable to faulting, and within single gneissic units. Both high and low-angle structures at Pogo are favourable hosts for gold-quartz vein mineralization. Phase I diamond drilling is now complete with assays pending from the following Tibbs zones: Michigan, Gray Lead and Wolverine. 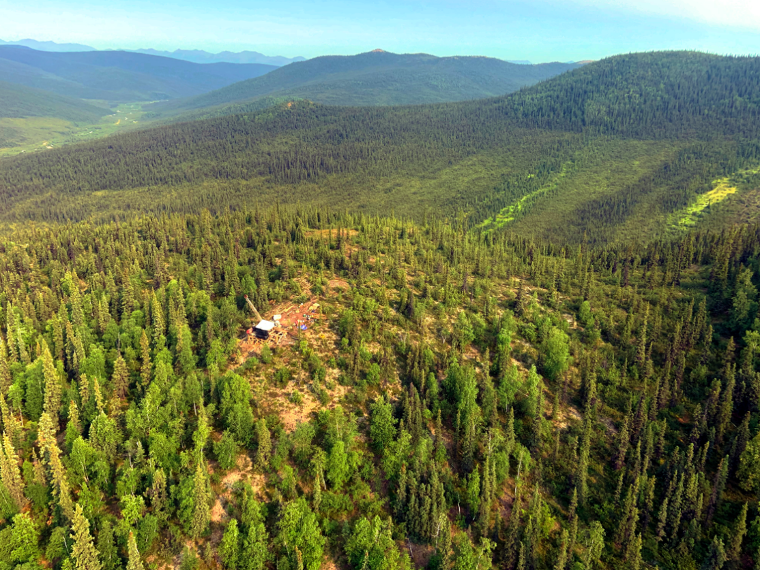 The Survey was designed to determine the subsurface geological and structural architecture at Tibbs, specifically in the western extent of the project where multiple Pogo-like gold-in-soil anomalies are found in prospective gneissic host rocks. The Survey successfully identified low and high-angle controlling structures coinciding with gold-in-soil anomalies, which the Company interprets as high-angle feeder structures adjacent to low-angle lithological contacts and possible fault zones – an analogue to the structural controls on mineralization observed at Pogo, located 35 kilometres (“km”) to the west of Tibbs.  Four TITAN lines were completed for a total of 16.8 line-km surveyed across the property.

Tony Reda, President & CEO, commented, “Following the successful completion and interpretation of the results of Tectonic’s 2021 TITAN survey, we have kicked off our Phase II drill program given the Survey confirmed our exploration model of high-angle fault structures which host high-tenor gold, arsenic and bismuth soil anomalies that are found immediately adjacent to two panels of moderately dipping gneissic rocks. The gneissic rocks host gently dipping conductivity anomalies which may represent low-angle structures analogous to the shear structures which host the Liese veins at Pogo. Tectonic moved quickly to exploit the Survey’s findings, commencing Phase II of our drill program at our West Trench target, and we look forward to testing the never before drilled gneissic portion of Tibbs.”

The Company is highlighting the West Trench Survey results in this news release; however, for a detailed discussion of the complete Survey, its purpose and targets, please see Tectonic’s news release dated July 20, 2021, here. 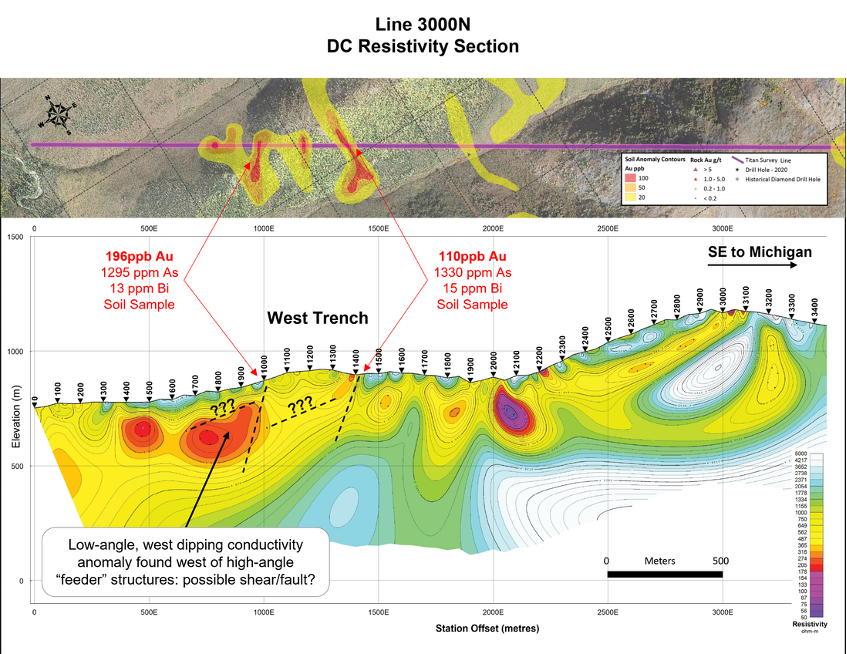 At West Trench, a prominent conductivity anomaly was found immediately west of two controlling high-angle fault structures. Both structures host high-tenor gold, arsenic, and bismuth soil anomalies at surface (“Au-As-Bi”), indicating the structures were open to a mineralizing fluid. The low-angle conductivity anomaly is found adjacent to the interpreted moderately west dipping contact between augen gneiss and paragneiss, the latter comprising the host rock at Pogo. The anomaly begins only 80m below surface, well within reach of conventional drilling methods, and extends for over 600m along the modelled section. Mapped geology at surface indicates a possible moderately west-dipping contact between augen gneiss in the west and paragneiss in the east, suggesting that the low-angled conductivity anomaly may represent a low-angle structure.

Previous field observations and structural analysis undertaken by Tectonic suggests the presence of low-angle extensional structures and shears within the gneissic rocks. This structural and geological setting resembles that found at the Liese zone at Pogo, where low-angle reactivated shear structures host gold mineralization in quartz-sulphide veins. The subsurface resolution provided by the near surface DCIP and deep looking MT has aided in the interpretation of the structural architecture of the project. Results of the Survey are directly influencing drill collar locations and planned hole depths for the Company’s ongoing oriented diamond drilling campaign.

TITAN is a unique survey that employs two separate geophysical surveys: DC Resistivity and Induced Polarization (“DCIP”) and Magnetotelluric (“MT”). At Tibbs, the Survey provided DCIP resistivity and chargeability sections to 750m depth and MT sections to a maximum of 3,700m depth, allowing for interpretation of controlling features of the structural corridor.

Four TITAN lines between 4,000m and 4,400m long and spaced approximately 1,000m apart were completed at Tibbs. Survey lines were oriented roughly northwest-southeast in order to orthogonally transect the dominantly northeast trending structural corridor at the project area. Dipoles were spaced at 100m along each line with MT sites spaced at 200m intervals to provide survey coverage to significant depths (DCIP to approximately 750m depth; MT resistivity to approximately 3,700m depth in this Survey).

A map of the completed TITAN lines can be found on Tectonic’s website here.

Tectonic’s ongoing 2021 exploration program consists of the first oriented diamond drill core in the property’s history, a TITAN survey, and geological mapping and prospecting. The program is designed to obtain structural control on high grade mineralization drilled by the Company over the previous two seasons, while also refining and testing newly discovered exploration targets with similar structural, geological, and geochemical features as mineralization at Pogo.