VANCOUVER, B.C., September 2, 2020 – Tectonic Metals Inc. (TSX-V: TECT; OTCQB: TETOF) ("Tectonic” or the "Company") today announced the acquisition of two underexplored properties, collectively referred to as Carrie Creek, adjoining the Company’s Tibbs Gold Project (“Tibbs”) and a nearby polymetallic property, Mt. Harper. The properties comprise of 15,800 and 49,800 acres, respectively, Native Owned Land belonging to Doyon, Limited (“Doyon”), one of Alaska’s largest Native Regional Corporations and private landholders. Doyon and Tectonic have once again formed a mutually beneficial mineral lease property agreement covering all aspects of exploration through to production, including royalties. The resulting agreement aligns the interests and expectations of all parties involved, reduces risk, and streamlines the process of advancing a project from discovery through to the development of a mine, if and when that is achieved. 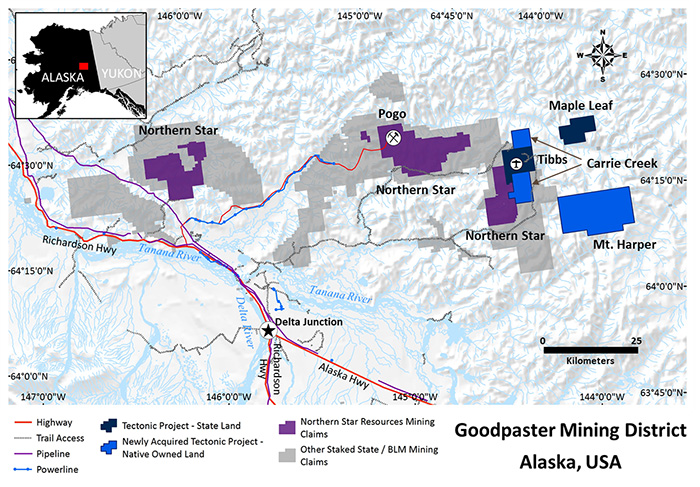 Tony Reda, President and CEO of Tectonic Metals, commented, “The acquisition of three prospective properties at Carrie Creek and Mt. Harper represents another forward shift in the game for Tectonic as we ramp up our exploration activity in Alaska’s Goodpaster Mining District. Carrie Creek’s 15,800 acres more than doubles our existing Tibbs exploration acreage, which, with the addition of Mt Harper’s 49,800 acres, adds an additional 65,600 acres of underexplored property to Tectonic’s total. The Carrie Creek and Mt Harper properties not only represent a broadening of the exploration territory available to us and the creation of a district-scale opportunity for Tectonic, but also a further strengthening of our already close partnership with one of Alaska’s leading Native Regional Corporations, Doyon. Tectonic is proud of its strong working relationship with Doyon and our collaborative approach to structuring innovative lease agreements, which cover all aspects of exploration and production while supporting the local community by contributing to the Doyon Foundation, a non-profit charitable organization benefitting Doyon shareholders. We are committed to our goal of finding the next Alaskan gold mine and providing economic and social benefits to the communities in which we work and operate.”

The addition of these three prospective properties contributes an additional 65,600 acres to Tectonic’s total exploration territory in Alaska’s Goodpaster Mining District (“Goodpaster”)  which hosts the operating Northern Star Resources (ASX: NST) (“Northern Star”) Pogo Gold Mine  (“Pogo”). These properties were last explored in the late 1990s and have been sitting dormant for over 20 years. Tectonic believes that through the application of newer geological models and analysis combined with modern day exploration techniques, the Company can unlock the potential of these newly acquired properties.

The mineral lease agreement between Tectonic and Doyon (the “Agreement”) grants Tectonic a 100% interest in both the Carrie Creek and Mount Harper properties.  In line with Tectonic’s business model and risk management strategy, the Agreement covers all aspects of exploration, development, production and royalties.

Tectonic Metals Inc. is a mineral exploration company created and operated by an experienced and well-respected technical and financial team with a track record of wealth creation for shareholders.  Key members of the Tectonic team were involved with Kaminak Gold Corporation, the company that raised C$165 million to fund the acquisition, discovery and advancement of the Coffee Gold Project in the Yukon Territory through to the completion of a bankable feasibility study before selling the multi-million ounce gold project to Goldcorp Inc. (now Newmont Goldcorp) for C$520 million in 2016.

Tectonic is focused on the acquisition, exploration, discovery, and development of mineral resources from district-scale projects in politically stable jurisdictions that have the potential to host world-class orebodies.

Tectonic believes that responsible mineral exploration and development can positively impact the communities in which the company lives and operates and is committed to early and ongoing community engagement, best practices in environmental stewardship and the development of a strong safety culture. Whether at home or at work, the Tectonic team is grounded on the following core values:  passion, integrity, patience, focus, perseverance, honesty, fairness, accountability, respect and a play big mindset.  The company works for its shareholders and is committed to creating value for them.

For further information about Tectonic Metals Inc. or this news release, please visit our website at www.tectonicmetals.com or contact Bill Stormont, Investor Relations, at toll-free 1.888.858.9887 or by email at info@tectonicmetals.com.

Certain information in this news release constitutes forward-looking information and statements under applicable securities law. Any statements that are contained in this news release that are not statements of historical fact may be deemed to be forward-looking statements. Forward-looking statements are often identified by terms such as “may”, “should”, “anticipate”, “expect”, “intend” and similar expressions and include, but are not limited to, statements with respect to the potential for mineralization at Tectonic’s projects,  benefits of the acquisition of properties, and any future exploration activities.   The Company makes no representation or warranty regarding the accuracy or completeness of any historical data from prior exploration undertaken by others other than the company and has not taken any steps to verify, the adequacy, accuracy or completeness of the information provided herein and, under no circumstances, will be liable for any inaccuracies or omissions in any such information or data, any delays or errors in the transmission thereof, or any loss or direct, indirect, incidental, special or consequential damages caused by reliance on this information or the risks arising from the stock market.