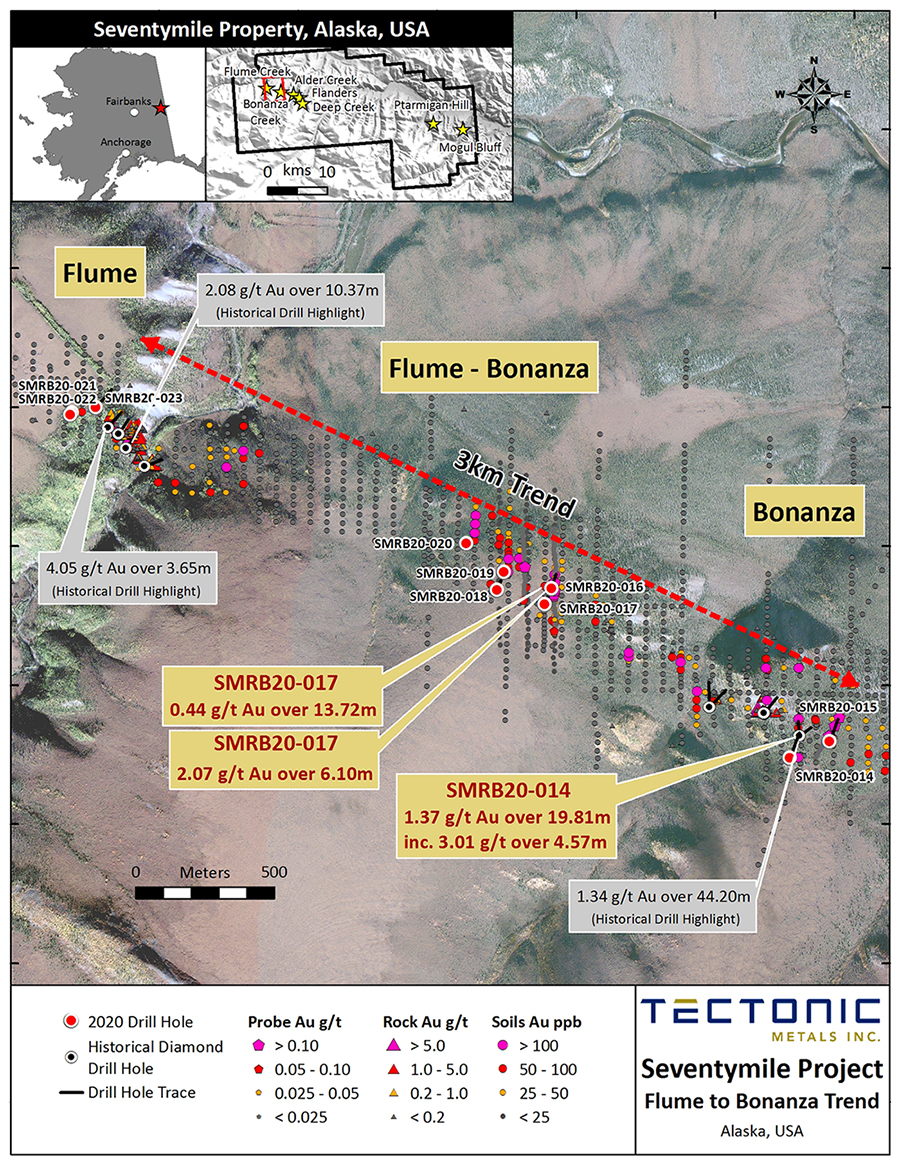 The Seventymile property is located within the Yukon-Tanana terrane (YTT), an accreted terrane comprised mainly of Proterozoic to Triassic metaigneous and metasedimentary assemblages, largely of continental affinity. The YTT extends from east-central Alaska to south-central Yukon and comprises numerous pulses of arc magmatism accreted on to the Ancient North American Continent. The YTT is bounded by two major transpressional faults: the Tintina Fault Zone to the north and the Denali Fault to the south. Both have undergone dextral displacement of roughly 400 km since the late Cretaceous.

In the Seventymile area, the “Seventymile terrane”, a narrow assemblage of Permian-aged submarine ophiolitic ultramafic rocks, non-ophiolithic mafic to felsic volcanics, and lesser limestones and quartz rich clastic rocks, extends WNW-ESE, roughly paralleling the Seventymile River to the north. This terrane is equivalent to the Slide Mountain terrane in southern Yukon and parts of British Columbia. In Alaska, it forms a discontinuous belt that trends northwest from the Yukon Territory through the property and to the Shaw Creek fault, where it has undergone sinistral offsetting. The Seventymile fault, a splay of the Tintina fault, defines the northern boundary of the Seventymile terrane, separating it from YTT rocks to the north. The Seventymile terrane has undergone thrust faulting that forms the lithological contacts between the major lithological units. The ultramafic units form the leading northern edge of the main thrust sheet, the greenstone and metasedimentary rocks were successively thrust over these. The south boundary of the Seventymile terrane abuts YTT rocks that are distinguishable from the northern YTT rocks by their pelitic composition. In the northern and eastern property area, Paleozoic stratigraphy is overlain by poorly consolidated Tertiary conglomerate, sandstone, and minor lignite. These sedimentary units host the Ptarmigan Hill and Mogul Bluff epithermal Au prospects.

Three episodes of folding have occurred within the Seventymile property. The earliest comprises small-scale folding within the schists of the YTT of the northern and southern property areas. The entire property was subjected to southwest to northeast ductile compression, the axial planes of which strike sub-parallel to the Seventymile fault. A second folding event has been interpreted to result in open folding indicated by a vertical northeast-trending axial planar fracture cleavage. The final folding event is related to strike-slip movement of the Tintina fault system, resulting in isoclinal folds with nearly vertical fold axes.

Three generations of faulting have also been identified. The first comprises south-dipping thrust faults that form contacts between the serpentinite and basalt units. The second generation comprises NW-SE-trending transpressional faulting, represented by the Tintina Fault and forming the dominant structural features of the Seventymile terrane. The final episode of faulting resulted in a vertical, northeast trending fracture set with minor strike slip displacement (both sinistral and dextral). This fracture system resulted in a set of northeast-trending topographic lineaments in the Seventymile Terrane that control the northeast orientation of the creeks draining this area.

Mineralization in the Flume Creek trend occurs along a major thrust fault dividing footwall serpentinite from hanging wall volcanic packages to the south. Auriferous mineralization occurs in variably oriented quartz-carbonate-arsenopyrite-pyrite veins and vein breccias up to 0.61 m thick and hanging-wall stockwork vein zones up to 9.1 m thick. The four prospects (Flanders, Alder, Bonanza, Flume) are marked by a semi-continuous NW-SE-striking soil anomaly. At the Flanders prospect, gold mineralization at surface has been newly identified by Tectonic at a steeply south dipping contact between basalt and ultramafic rocks in the north, and a volcanosedimentary package to the south. This contact is interpreted as a controlling shear which appears to have acted as a conduit for mineralizing fluids; the contact has never been drilled.